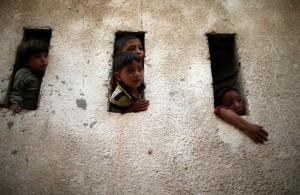 These little boys looking out the window are in Beit Lahiya in the Gaza Strip. Beit Lahiya was targeted during Israel’s 51-day carpet bombing siege in 2014 & a special needs facility was bombed. Two adults with mental & physical disabilities were killed.

In March of this year an Israeli airstrike on Beit Lahiya killed a 6-year-old girl named Israa Abu Khussa.

These little guys are not safe. That gives a certain urgency to honoring & building the hell out of the economic, cultural, & academic boycott of Israel. Buy nothing with barcode beginning 729 & check every damn barcode to make sure. Singers who violate the Palestinian call for a cultural boycott most often perform in Tel Aviv, about 45 miles from Beit Lahiya, thus providing the soundtrack for ethnic cleansing. That’s why appealing to them to honor the boycott is so important.