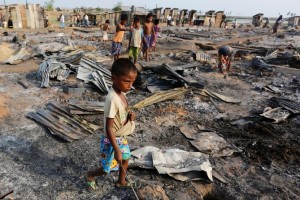 If we believe everything we read & never investigate the dominant political narratives, Islam is a belligerent theology producing paramilitary terrorist groups all over the world; violence is inherent to Islam.

In fact, the persecution & ethnic cleansing of Muslims around the world is centuries-old & remains violently operative in several countries today, including (but not only) India, China, Myanmar, the Philippines, Russia, Vietnam, Cambodia. This indictment includes the rancid promulgation of Islamophobia used today by the US, European, & other countries to justify bombing the hell out of countries in the Middle East, most notably (but not only) Afghanistan, Iraq, Yemen, Gaza.

If in the onslaught of persecution, some Muslim activists have developed wrong-headed strategies to oppose it, that’s the nature of political resistance under stress. Al-Qaeda, ISIS, & groups of that ideological genre owe more to malicious meddling by the CIA & US Pentagon than to any theological tenets of Islam.

Standing against Islamophobia today–& not bending an inch in that direction–is central to opposing war, occupation, genocide. If you want to look for the religion & theology causing problems around the world, it is best found in the stock market creed that makes a god of greed.

This little guy is a Rohingya Muslim walking midst the ruins of one of the concentration camps Myanmar has set up for Muslims in Rakhine State near Sittwe.