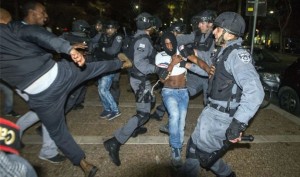 Reposting this from one year ago today since racist conflicts in Israel are crescendoing inevitably since supremacism & racism are the heart of Zionist ideology & a Jewish-only state. Actually, that is the very Achilles Heel of Zionism which is incompatible with democracy.

Zionists are unable to explain (away) this picture of Israeli cops beating up on Ethiopians in Tel Aviv protesting racist discrimination & police brutality–which the media caption calls “alleged” even after they post this photo that would be evidence in criminal court.

It’s a great political disadvantage for Israel to have international exposure of its profound racism–built into the very nature of a Jewish-only state–whilst it is fighting a battle against the economic & cultural boycott (BDS) & growing Palestinian solidarity. But the unbearable tensions & contradictions of Zionism, unable to deliver on its promises, are erupting within Israel. That makes BDS all the more important.

There are leftists, who don’t know their ass from their elbows, who claim BDS will hurt Israeli workers. Do they mean the workers living in Zionist settlements in the West Bank on Palestinian lands? The very ones poisoning Palestinian water wells, pulling up their olive trees, torching the mosques, attacking the little kids? Or do they mean workers in Israel’s blood diamond industry? Or perhaps in the defense industry which produces 41% of all drones? It would be good if these leftist moralists would evince an iota of actual information on which they base their claims–instead of formulas that would make even Karl Marx turn over in his grave & weep.

BDS will affect Israeli workers & that’s a damn good thing. If they continue in their majority to support apartheid & ethnic cleansing, they’re facing a political abyss & a future rooted in war & militarism. If BDS shakes them up, rattles their consciousness, forces them to examine Zionism & a Jewish-only state (making them more backward than feudalism), that is nothing but politically necessary.

The world watched in horror last summer as residents in Sderot, Israel pulled up easy chairs in the hills overlooking Gaza to cheer, wave the Israeli flag, & get a front row seat to genocide; we read Israeli writers discuss how the ethnic cleansing of Gaza was good for getting rid of belly fat. Human beings were meant for better things than psychopathy. Those whose ancestors suffered unbearable persecution for centuries were meant for better things than social hatred. They should be gurus of social tolerance & respect, not avatars of cossacks & storm troopers.

The violence against Ethiopian Israelis is of a piece with apartheid & the ethnic cleansing of Palestinians. Standing with them, building the economic & cultural boycott of Israel is a way of reaching out to Israeli workers in a gesture of good will, not with aggression. Because the only solution to the chaos Zionism has wrought is a democratic secular state where Palestinians & Jews live as brothers & sisters & they can stand together as beacons for the rest of humanity.