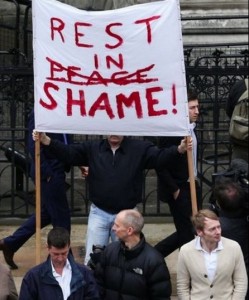 This is the third anniversary of the ceremonial funeral of Maggie Thatcher, the British version of Henry Kissinger. It’s a time of celebration, of dancing in the streets & pissing on her grave. Bring out the brass bands!

I’m reposting this from that glorious moment in 2013. Don’t ask me not to speak evil of the dead; I wasn’t much kinder when she was alive. Her crimes against humanity mark her eternally for damnation.

It sure took long enough to bury old Maggie but word is, it’s finally over. She got the military funeral she deserved since militarism was her middle name & destruction her only passion. It’s not hard to be an Iron Lady when you have an army & air force behind you. The real reason for the military send-off is they needed extra soldiers to supplement the 4,000 cops protecting her stinking corpse from English rebels lined up on the side lines of this funeral fiasco. If there were any actual mourners would they have needed the security barricades outside St. Paul’s Cathedral?

Reportedly, 2,300 people from 170 countries got tickets to the event. There wasn’t a miner or Irish Republican among them. But the cathedral was chock full of war criminals & other unsavory creeps that make you shudder: Henry Kissinger, Tony Blair, the Windsor clan, & what are described as veterans of the Falklands war (meaning the generals who led it).

In his eulogy, the Bishop of London Richard Chartres outdid himself in sycophancy saying the funeral was no place to debate Maggie’s political legacy or the impact of her disastrous politics. It was instead the place to build mythology about her. When he praised her for personal kindness, it was all downhill from there. By the time he got to Maggie as feminist icon even Kissinger was rolling his eyes.

She’s getting cremated hoping thereby to escape the fires of hell. Satan didn’t set things up that way so Maggie’s granddaughter read this passage from Ephesians to console granny on her trip to hell: “Put on the whole armor of God, that ye may be able to stand against the wiles of the devil.” But Ephesians & that iron won’t do granny any good in hell. Good riddance now, Maggie!