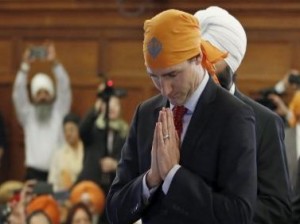 That Justin Trudeau is one slick operator. With great spectacle involving dancing, jokes, ritual, prayers, & this saffron headscarf, he made apologies to the Sikh community in Canada for a 1914 incident when Canada refused at gunpoint to allow Indian refugees to disembark in Vancouver. They were forced to return to Calcutta where many were killed by British colonial troops & others were jailed.

It was a monstrous crime but not the same scale of crime as the $15 billion arms deal Trudeau just negotiated with Saudi Arabia for the bombing siege against the people of Yemen.

Saudi Arabia is a longstanding trading partner of Canada & one of Canada’s political allies. Trudeau thinks dialogue is better to curb Saudi Arabia’s extremist policies like beheading democracy activists & bombing Yemen to smithereens than withholding the arsenal to carry those crimes out.

All over social media, we see nothing but drooling admiration for Trudeau. At what point will people learn to look beyond the dog & pony spectacles & stop making excuses for human rights & war crimes?

(Photo of the slime ball of the tundra from Reuters)