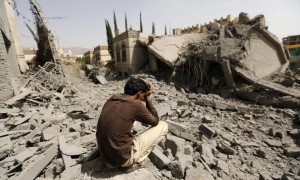 This is a clarion call, a red alert to gather the international forces of democracy like we saw in the Arab uprisings, including Yemen. Rebuilding the international antiwar movement has never been more urgent. Some can sniff at the call with contempt because they disdain the power of popular opposition to tyranny. Cynics never have led social change; they just stand on the sidelines saying it can’t be done.

Humanity may not learn much from history & may keep repeating the same mistakes but one irrefutable fact is that the only times tyranny has been overthrown is when working people take justice into their own hands & rise up to change things. What we haven’t yet learned is how to forge a new society & maintain it. But now we know with the certainty of too much experience that democracy in every facet of life is the sine qua non of social transformation. And bombs play no part in that.

Rebuild the international antiwar movement. No to US-NATO wars!