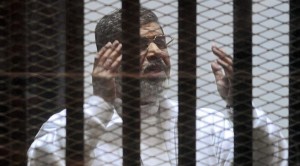 An Egyptian kangaroo court upheld the death sentence of ousted president Mohamed Morsi. In Egypt, that’s by hanging or firing squad. He’s guilty of treacheries against the Egyptian people–in particular, colluding with the military while in office–but he is not guilty of the charges against him, including plotting a jailbreak, attacking police in the 2011 Egyptian uprising, & spying for Hamas & Hezbollah.

We can disagree till the cows come home about the nature of the coup that bounced him; we can even disagree about the character of his politics. But we should be able to agree that the ferocious crackdown on the Muslim Brotherhood by the General Sisi junta is an outrage–whether you like the MB’s politics or not or condemn their reactionary role while Morsi was in office. Hundreds have been killed & thousands incarcerated.

President Erdogan of Turkey has offered political asylum to Morsi. It’s not that smart to hang politicians that played ball with the junta & the oligarchs. There’ll be fewer minions willing to do it in the next crisis–which is certain to come. So it’s still possible Morsi will get a reprieve to Turkey.

He was no rebel or champion of democracy; on the contrary, he was a violent opponent of the Egyptian uprising. But a show trial in a kangaroo court is not justice. It’s an attempt of the junta to demoralize & destroy every vestige of popular resistance. Morsi & the MB are scapegoats.You can detest the role of the MB when Morsi was in office but you cannot in justice stand mute while the regime goes after them hammer & tong, assaulting them, shooting them down, arresting & torturing them, declaring them a terrorist organization. The defense of the MB today is the defense of the Egyptian revolution.

These show trials make crystal clear how linked the Palestinian struggle is to the Egyptian revolution. When the kangaroo court made Hamas a centerpiece in the trial it is because solidarity between Palestinians & Egyptians is the very heart of social transformation in the Middle East.

Our fullest solidarity with the MB under attack & our strongest condemnation of this kangaroo travesty.

(Photo of Morsi in his courtroom cage from EPA)