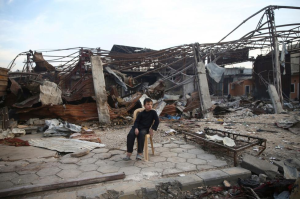 The rebel-held Douma neighborhood of Damascus, Syria has 100,000 civilian residents forced to live most of their lives in underground shelters because of heavy shelling from Syrian ground forces & Syrian airstrikes.

The justification given by the Assad dictatorship & his supporters is that the military bombardment is to take out “throat-cutting jihadists.” It must be asked by serious political people if bombing cities with 100,000 civilians is an appropriate military strategy for destroying paramilitary militias bunkered there? Or is the opposition to Assad broader than the paramilitary groups?

How does this small girl injured in a Syrian airstrike last Monday figure into such a barbaric military strategy?