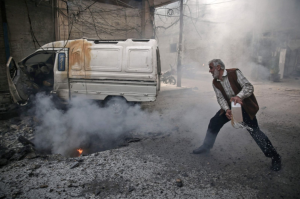 This is another scene last Monday in Douma, on the outskirts of Damascus, Syria: an older man is trying to extinguish a fire caused by Syrian airstrikes.

Once again it must be asked: is bombing a city of 100,000 civilians, including children, elderly, disabled, sick & infirm, an appropriate military strategy? Is there any worthy justification to convince human rights & antiwar activists that bombing civilians is necessary in defense of democracy? Because when US-NATO forces use that argument, only the most backward, racist, & reactionary forces in the world buy it.