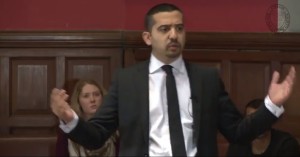 Most Christians are hard-pressed to explain much of their own theology let alone that of other Christian sects & denominations. There are hundreds (thousands?) of sects that parse the Bible into infinity & then there are the Catholics who never even read the book. Some groups have supplementary theological texts (like the Mormons); some wear uniforms (like the Salvation Army); some spend all the Sabbath in church & some hot foot it out after a half hour mass. Some of those sects are just plain wacky. The exact same thing is true of Judaism. Or what’s a Talmudic scholar for?

So when media goes hog wild with the accusations about Islam, you have to know they’re talking through their asses. They don’t have a clue if the Qu’ran is even published in English. Or is it in Arabic? Or Swahili? Or Polish? Are there different versions of it as there are of the Bible? They don’t know the difference between a Sunni & a Shia. They still can’t believe there are white Muslims or African ones; they thought it was just an Arab thing. And what the hell are Black Muslims in the US all about? They don’t know so they just make things up. Because the campaign is not about Islamic theology; it’s about vilifying a religion & fostering social hatred to justify military occupations, drone bombings, neoliberal colonialism & barbarism. And political repression.

It’s one thing to deal with the low-level crap of Islamophobia. We’ve heard it all before a thousand times because racism, prejudice, & stereotype all have a certain monotonous & moronic pattern. Every time they (& we should not have to identify who “they” are) want us to hate on another group, the chorus of media & academia start droning scary tales chalk full of boogie men. A lot of people still can’t see through that stuff. It usually can’t be reasoned with but there’s no need to get on a high horse about it because the learning curve to overcome social hatred is a tough one to navigate. And what isn’t responsive to reason folds like a paper tiger before the power of a massive social movement. The US Civil Rights Movement is only one case in point.

The good news is there is no high-level to this stuff. Even when it’s published in places like the NY Times or Washington Post or debated at Harvard or Oxford, it’s the cacophony of fools. Ignorant, stupid fools. The Washington Post published an article on October 6th titled “Ben Affleck & Bill Maher are both wrong about Islamic fundamentalism” which discusses a 2013 Pew Research Center poll of 38,000 Muslims about Sharia law, honor killings, stoning of adulterers, “death for apostates”, the role of women in society. The poll concludes, contrary to the title, that Bill Maher is in fact absolutely correct & Muslims are a dangerous homicidal lot. All 1.6 billion of them. If reports coming out of Israel about the massive support for Operation Ethnic Cleansing in Gaza are at all accurate, that means Muslims have a lot in common with Zionists.

You can parse that damn Pew poll as scrupulously as some evangelicals do the Bible but what’s the point!? It’s horse manure masking itself as social science. They have a section describing a methodology so paltry it would get flunked in a middle school social studies class. No distinctions are made between social classes, Muslim denominations, rural/urban differences, whether or not the country is currently under occupation or bombing, if there have been persecutions or pogroms against them, or if they live in a country like Egypt which had a revolution pulled out from underneath them by the Egyptian military & US Pentagon. We’re supposed to believe Islamic theology not politics produces terrorists because by nature it is hateful & bellicose when in fact it’s the producers of this crap who are hateful & bellicose–& stupid. Supremely stupid.

Read the damn thing if you like; do it on an empty stomach so there are no regrettable mishaps as a result. And be aware the Washington Post article represents Muslims much more unfavorably & succinctly than the report itself–even though it’s hard to be succinct about what 1.6 billion people think & feel.

But then watch this video of Mehdi Hasan, a British Muslim & political journalist taking out some academic Islamophobes at Oxford University student union. When he’s finished with them, they’re drooling spittle into their crotches & their disgrace alone is worth the viewing: https://www.youtube.com/watch?v=ahPQSsvqbyY