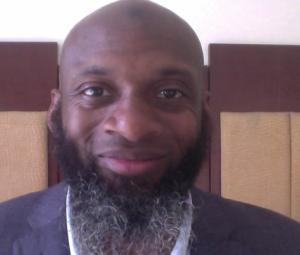 Bilal Abdul Kareem is an American journalist reporting from Syria & “embedded” with the revolution rather than up the ass of the Syrian army like Robert Fisk, Eva Bartlett, Vanessa Bartlett. Because of that, he has become the bête noire of Assadists & the Hands Off Syria Coalition. His interviews conflict with their lies.

Kareem just announced that he & Al Jazeera journalist Ahmad Zaidan have filed a lawsuit against the Trump administration for including them on the US kill list. This is an important legal challenge to the existence of a kill list & the extrajudicial execution by drone of anyone but especially of journalists who have not been accused of any crimes.

Assadist social media sites, including Vanessa Beeley’s, are filled with jubilation, fist pump & dancing emoticons, & calls for the US to take Kareem out. One even posted the photo of a gorilla, the putrid cliche of racism & white supremacy. There’s no purpose to querying the contradictions of Assadist propaganda–nor the repugnancies. Anymore than there is to doing an exegesis of KKK ideology.

If you stand for civil liberties, for the right of journalists to report without being kidnapped, arrested, murdered, bombed to death, then you stand with Kareem & Zaidan & support their challenge to the odious kill list.

Please like & share Kareem’s FB wall as an act of solidarity, even if you don’t see eye-to-eye with him on Syrian politics. (I don’t entirely.) Agreement is beside the point. Civil liberties is the issue.