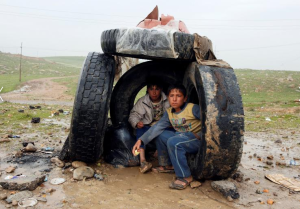 Liberation US-style–Mosul: Iraqi kids in flight from the war zone where they used to live, now being bombed to smithereens so they can be free. Free of ISIS & terrorized by the US-led coalition of 60 countries making Iraq a killing field.

No US war in Iraq! US out of Iraq & Syria! Russia & all foreign military forces out of Syria!