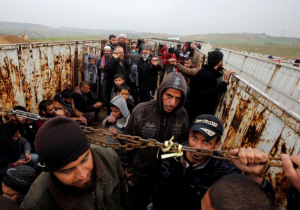 The media caption to this photo read: “Displaced Iraqi families who fled from clashes during a battle between Iraqi forces & Islamic State are transferred to different camps outside Mosul, Iraq.”

“Fled from clashes during a battle” is such a nondescript way of expressing the terror & horror of fleeing with your kids from your neighborhood while it’s being bombed to smithereens.

Unless the eyes deceive, those being transported in this filthy cattle truck are men & boys. Human rights organizations are reporting that Iraqi forces are separating out men & boys fleeing with their families & detaining them as suspected ISIS fighters. So is that what’s going on here?

Bombing hundreds of thousands of civilians is not the method for fighting ISIS; it is a method to subordinate civilians.
US out of Iraq! Rebuild the international antiwar movement!