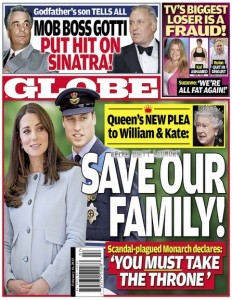 It’s just so deplorable you can only get important news in the checkout line at the supermarket. Many frugal news junkies no longer pay for internet & just stand in line all day, with one product at a time, so they can find out what’s going on in the world from National Inquirer, Globe, & People magazine. One Texas supermarket has actually set up bathroom stalls & lounge chairs at checkout so people can do their duty, catch up on news, & shop in one fell swoop. What has this world come to!?

Today we find out Betty Windsor wants to give up the throne so she can go into hiding from the shame of her kids. We’re surprised Betty knows shame. It’s heartening so we don’t want to taunt, but what did she expect when she married flatulent Phil? Even in his youth he was no prize package. Now they can’t tell if he’s dead or alive without poking him with a stick & they’ve hired a special vassal to do that.

Betty’s had more than her share of misery with those kids. We won’t even go into Andrew who needs to go from drug rehab straight to a penitentiary. It’s Cammy that’s distressing. They say she’s so eaten alive with jealousy over KKKKaty that she turned to whiskey for comfort & they had to force her into an ashram in India to detox with meditation, medicated oils, & vegetarian foods. We wouldn’t wish an addiction problem on anyone but Cammy needs to give up a lot more than chateaubriand & whiskey to recover. She needs to dump Charlie because he could drive anyone to drink. The only reason Betty is still sober is because she never liked her own kids. Or anybody else’s. That’s why it’s so easy to strip social services, education, & healthcare to pad her coffers. Cammy doesn’t have to ostracize; she & Betty can still play the horses together since it’s the only thing in their lives with meaning. That & Betty’s Yorkies.

Well, according to the Globe, the plot sickens. They report Willy doesn’t want to be king. But that doesn’t make sense. Why is he walking around like he has a pole stuck up his butt & an attitude if he just wants to live plebeian? Globe might be falling for PR here about Willy & KKKKaty. Betty knows if they don’t play that plebeian thing out those republicans will be crawling up her ass with demands for ending moochocracy. She’s walking a thin line here between scandal, perversion, idiocy, & exhaustion. We do wish we could confidently include shame in that litany.

They say KKKKaty is looking forward to being queen. She thinks the food rations may be increased from one biscuit a day to two & she may be able to get a lump of sugar in her tea.