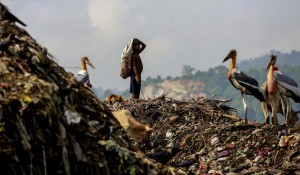 No this is not Gaza; right now, it’s hard to tell the difference but this is neoliberal waste management. This particular mountain of garbage, feces, rotting food, & unmentionables is in Gauhati, India. But since IMF austerity programs mandate privatization of waste disposal, such mounds can be found in most countries; those where they’re not found, transport landfill to one of the plundered countries or dump it in places like Somalian fishing waters. In the US, they pay to dump it on Indian reservations. Get the picture?

Unemployed working people comb through this toxic mash looking for recyclables to re-sell & along the way contact numerous respiratory, skin, & infectious diseases. Tons of this rubbish are petroleum products including plastics & styrofoam which have carcinogenic properties.

We aren’t told anything about this little fellow but we know he isn’t likely to have a long life. We don’t know what talents he has, what contributions he could make to music or literature or science. He’s not even taught to look at life that way since survival is the first commandment. Dreams belong to others.

But we have a dream for him–that he will get a nose full of the stench of neoliberal predation & become part, maybe even lead, that international movement that will challenge this entire way of operating our beautiful planet, that he will help make it a place where children grow up with dreams as their due. Many think that is all just romanticism, but who knows? If we don’t try, we already know it’s all downhill from here. If we give it our best shot, the children of tomorrow may live neither in utopia nor dystopia but in a world suitable for human life, where peace & justice reign.