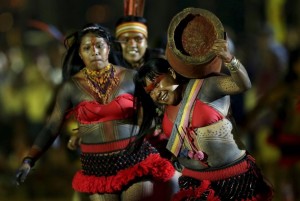 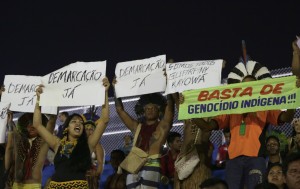 The first World Indigenous Games, modeled on the Olympics, were held in Palmas, Brazil from October 23rd to November 1st. Over 2,000 Indigenous athletes from between 20 to 30 countries participated, including several countries in the Americas, Australia, New Zealand, Russia, the Philippines, Ethiopia, Mongolia. From Brazil alone, 24 different Indigenous tribes participated.

The events included western-style games like soccer & traditional games like log carrying. Some of the games were competitive; others simply showcased athletic prowess. There was even the regrettable introduction of a western-style beauty pageant for women–in the west reflecting urban longing for a livestock show apparently not satisfied by once-a-year state fair exhibitions.

Since the 2014 FIFA World Cup held in Brazil, several stadia stand empty, growing weeds until the 2016 Olympic games. The World Indigenous Games weren’t held in any of those venues even though the games were a joint effort of the Brazilian Ministry of Sport, Marcos Terena’s Intertribal Council (ITC), & the city of Palmas.

Not all Indigenous peoples in Brazil treated the event like a celebration of Indigenous culture since the past several years have seen unprecedented violations by the Brazilian government of Indigenous land rights, massive dispossessions for agribusiness & mining, murder of hundreds of activists, military occupations to enforce neoliberal policies.

Indigenous activists from several ethnic groups in Brazil protested at the opening ceremony with signs saying “Stop the Genocide,” & “Demarcation of Indigenous lands now!” Those activists believe the Brazilian government is using the World Indigenous Games to whitewash its genocide against Indigenous peoples. Though on the surface, the athletic prowess of especially the women is impressive, quite frankly, they make a very strong case for a whitewash.

(Photo on top is women log carriers by Ueslei Marcelino; photo on bottom is protesters by Eraldo Peres/AP)