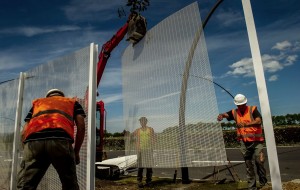 As if the European Union (EU) hasn’t already demonstrated sufficiently that it is run by cement-headed psychopaths–by letting thousands of people drown & feeding like vultures off retiree pensions–now they’ve opened a new front in Calais where thousands of refugees from Africa & the Middle East are attempting to cross to the UK.

The always contemptible David Cameron, playing to the xenophobes, said the UK will not become a safe haven for a “swarm” of immigrants–& he isn’t the only English politician slobbering all over himself against immigrants. England has also changed its laws, now making it a criminal offense punishable with jail time for renting to undocumented immigrants. Landlords will be required to check immigration status when renting out a unit.

The photo is French workers constructing one of the new fences at Calais. If there’s one thing Karl Marx understood it’s the need for working people around the world to stand with each other. When socialists part from that principle, they end up like Francois Hollande, the nebbishy xenophobe who runs France. It is truly regrettable that the state of labor solidarity is in such a sorry-assed state that one group of workers are hired to erect the guillotine for others.

These workers should have called a work stoppage. Why not? Every other worker at Calais is on strike, including truckers & ferry workers. With tourists going back & forth, the place is a hell of a mess with traffic backed up on both sides. Until that solidarity thing is straightened out, workers from every country will be taking it in the neck in another demonstration of chickens coming home to roost.