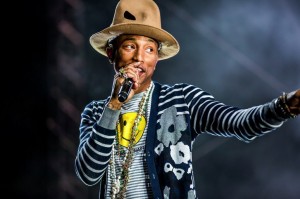 Behold the jester for Israeli apartheid! Pharrell Williams just shot himself in the ass by continuing with his performance today in Cape Town, South Africa as part of an endorsement deal with Woolworth’s, a grocery chain that sells Israeli products. The BDS movement promised to protest his gig if he did not cancel.

The City of Cape Town shamefully imposed a limit of only 150 BDS activists protesting the event. During the barbaric 2014 carpet bombing siege of Gaza, protests across South Africa, including Cape Town, included hundreds of thousands of people.

Electronic Intifada reports that Saturday a South African High Court found the 150 limit unconstitutional & ruled the protest could include up to 16,000 people. The judge isn’t stupid. Once a protest hits 10,000, who’s counting? And who’s going to stop them from growing to 40,000 which is what some media is predicting?

A salute to the Palestinian solidarity movement in Cape Town. In the words of 1960s protesters, “sock it to him!” We only wish we were there to join you but we send our solidarity. Please post pictures so we can savor the moment.