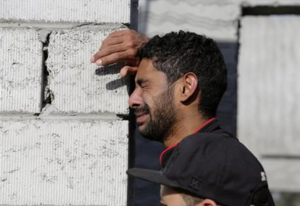 Behind defiance against tyranny is the grief: Today thousands chanting pro-freedom slogans attended the funeral of activist Bilal Ahmad Bhat in Kashmir. Israel tries to prevent such protests by refusing to return the bodies of those it has executed. This young Bahraini man cries during the funeral of 18-year-old Ali Abdulghani attended by thousands chanting slogans & holding up posters with the picture of young Ali.

Reports don’t identify what the repressive Bahraini regime accused Abdulghani of doing but he was on the run after being sentenced to five years in prison–almost certainly for protesting since his mother was released from prison just a few weeks ago. When police & masked men cornered him at his aunt’s house, he fled.

The Ministry of Interior tweeted that he was Injured in a fall from a building while trying to escape but witnesses claim he was run down by a police vehicle chasing him.

Our deepest condolences to the families & our fullest solidarity with those struggles.