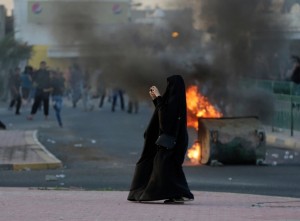 So much Islamophobic paranoia & fear-mongering is rooted in misogyny, fixated on the veil & the role of women. It masks that with sentimentality & false outrage but then sets out to free them by bombing them & their beloved to smithereens.

That’s one reason why the Arab uprisings, especially in Egypt, Yemen, & Bahrain were met with such ruthless violence by the US, Saudi Arabia, the UK, & other regimes. Because in those countries, women, including thousands wearing veils, played a leading role that exposed the misogyny & rancidity of Islamophobia.

The veil actually proved quite effective in protecting women activists from being identified & targeted by police agents & from attacks with tear gas. Activists around the world adapted some form of it to deal with the ubiquitous tear gas assaults. You can call that cultural appropriation but it’s really something of a salute.

This scene yesterday in Bahrain is a woman photographing riot police attacking protesters with tear gas after the funeral procession of Ali Abdulghani, an activist run down by a police vehicle. The loud-mouthed pro-war commentators only exhibit such moxie in words & only if they’re backed by bombers.

Our deepest respect for these women.