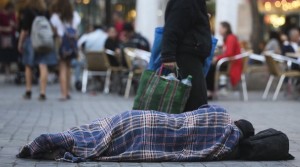 The sometimes contradictory but always remarkable Gideon Levy, Israeli columnist for Haaretz, wrote an article last week titled “Israel is galloping to the next war in Gaza: Israel is heading to the next violent eruption with the Palestinians as though it is some sort of natural disaster that can’t be avoided.” The article was a moving lamentation about the carnage left by Israeli ethnic cleansing last summer & he predicted the next siege will be this summer. It doesn’t take a Nostradamus to see that coming.

Some fear Israel is preparing the endgame against Palestinians in Gaza. When Israeli prime minister Ariel Sharon moved the Zionist settlers out of Gaza in 2005, it wasn’t a peace gesture but a tactic to facilitate & make genocide more like shooting fish in a barrel. But the acceleration of barbarism against Gaza & of settlements in the West Bank is not just to outpace the advances of international Palestinian solidarity & the growth of the boycott movement. Israel is a capitalist country where militarism, like in the US, distorts & saps the national budget. As a militarist society & as part of international neoliberalism it is spiraling into crisis & being compelled by irrepressible economic & political forces within Israel to resolve the problems at the expense of Palestinians. Part of this is scapegoating Palestinians to deflect from government culpability for the crisis; part is hoping that the massive inequities & problems within Israeli society will be solved by eliminating Palestinians.

There have been several studies done on the Israeli economy in the past several years, including by Israeli banks, decrying the housing crisis, the growth of homelessness (there are now tent cities for the homeless), the fact that one in five Israelis live below the poverty line. In 2013, the poverty line in Israel was set at 2,392 shekels per month per person. A one-bedroom apartment with utilities rents between 2,926 to 3,460 shekels. Israel has the highest poverty rate among “developed” countries at 21 percent of Israelis & one of the biggest income disparities between rich & poor.

The Taub Center for Social Studies in Israel issues regular reports on poverty in Israel. Last year, they found that 40 percent of Israelis forego dental care & 35 percent do not adequately heat or cool their homes due to cost. Even with universal healthcare in Israel, 38 percent could not afford medications.

Predictably, the Taub study found that 50 percent of Arab Israelis & 57 percent of Haredim (ultra-Orthodox Jews) live below the poverty line due to unemployment. They didn’t include discrimination as a cause but that is beyond dispute. Neither group can afford to heat or cool their homes & purchase medications.

Israel is a colonial-settler state. It cannot induce thousands of freeloaders to move to Israel if it cannot provide secure, affordable housing & they do not expect to come & be housed in huts, tents, & packing crates. But Israel has a bloated military budget to maintain the occupation, crush Palestinian resistance, guard settlements, & protect bulldozers taking out Palestinian lands. This involves heavy expenditures for roads, farm machinery & equipment, bulldozers, tanks, ammunition, & a standing army–expenditures that cannot go to housing.

For the past few years, Israel has been instituting austerity policies cutting back even more on social services & igniting protests throughout the country. The only hope for Israeli working people is if they begin to connect the dots between militarism, apartheid, inequity, & genocide & forge alliances with Palestinians & African refugees against the neoliberal regime long-since capitulated to the barbaric phase of capitalism.

Palestinians cannot wait until Israeli working people come out of their stupor anymore than Blacks, Latinos, immigrants in the US have to wait for US workers to get with the program. The best way to serve working people is to evangelize for the economic & cultural boycott of Israel & demand “No aid of any kind to Israel!” There’s nothing like a little education & pressure to wake a sleeping giant up.