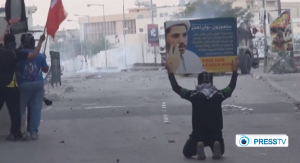 This protester in Bahrain is demonstrating for the release of political prisoners, especially opposition leader Sheikh Ali Salman, arrested in December 2014. His placard reads; “You will get exhausted but we won’t.” That defiance must scare the hell out of the regime & its US & UK allies & certainly explains the extreme violence & repression used against activists.

Our deepest respect & fullest solidarity with the movement that refuses to be beaten into submission.

(Image is screen shot from Press TV video on the protests)