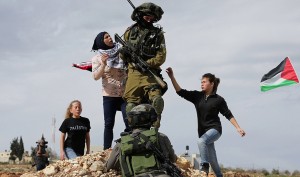 Sometimes (often) when you see photos of Palestinian resistance either in the West Bank or Gaza, you marvel that for nearly 67 years of violent Israeli occupation they have not ceased to struggle nor bent the knee to colonialism. What can explain such remarkable tenacity & determination?

The struggle against apartheid & ethnic cleansing is necessarily a family & a community affair & while children should be playing games & teenagers courting they are forced instead to take on the Israeli army & prevent Zionist settlers from all over kingdom come moving in & laying claim to Palestinian lands. What kind of life is that for millions of young people? And still they do not bend.

All the media baloney about Palestinian terrorism & the only weapons they have against rubber bullets, live ammo, skunk bombs, tear gas grenades, & bulldozers is slingshots, burning tires, & an immense human spirit of defiance.

These teenagers are scuffling with soldiers in the West Bank village of Nabi Saleh to protest the expansion of the Zionist settlement of Halamis on Palestinian land. When you consider that one false move gets them the Israeli gulag, you understand that courage, thy name is Palestine. And when you want to understand how to change the world, you look to them because social transformation starts with scuffles against all odds & ends with triumph over social hatred & injustice.

This is the time to build the hell out of the economic & cultural boycott of Israel, reaching out & explaining the justice of the Palestinian cause. We can no longer allow them to stand alone.