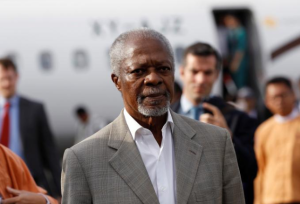 Former UN Secretary General Kofi Annan just returned from a whirlwind tour of Arakan state & claims he saw no evidence of genocide against Rohingya Muslims. But it isn’t that big a fall from UN chief to singing for your supper. Ban Ki-moon never saw much either.

Plus Annan is being well remunerated by the military junta to “see no evil, hear no evil, report what he’s told.” Media continue to report that his mission is to address genocide in Arakan despite his repeated statements refuting that. You can’t usually take politicians at their word but this is a case when you should.

He told BBC there are tensions & fighting, fear & mistrust between Buddhists & Rohingya Muslims but no genocide. Well the genocide human rights activists are concerned about is that of the military junta in the second month of a rampage against Rohingya Muslims & arming right-wing nationalist Buddhists as auxiliary forces. Buddhists in Arakan are not being hunted down like animals, their villages are not being torched, they are not fleeing for their lives to Bangladesh. If some Buddhists are tense or fearful about Rohingya, it’s the same kind of angst the KKK feels toward the Black community in the US.

The question is: whose word should we take on genocide in Arakan state? That of Suu Kyi & the junta? That of Kofi Annan? Or that of Rohingya human rights activists & refugees? Who are the ones being exterminated & fleeing & not being paid to lie or bury their heads up the keesta of the military junta?