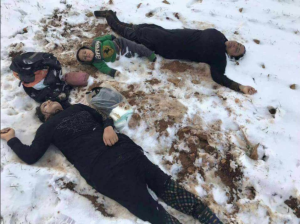 The bodies of ten Syrians, including a three-year-old child & an elderly man, were found frozen to death on the Syria-Lebanon border trying to escape Syrian & Russian bombing of civilians–most likely in eastern Ghouta which is closer to the Lebanese border than Idlib where Syria & Russia are also bombing civilians. Thousands of Syrians flee every day as a result of the Assad regime’s criminal actions against civilians–from carpet bombing them to employing a surrender or starve strategy.

It’s certain the families of the deceased will be jubilant they died martyrs to Assad’s national sovereignty & his right to maintain gulags, forcibly disappear dissidents, hang political prisoners, carpet bomb & gas hundreds of thousands of civilians, & starve them out of food & medical care.