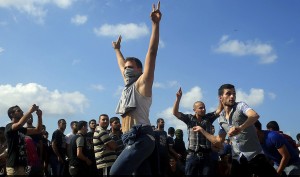 To understand the art of propaganda, to really get a belly-full of the stuff, you just have to read coverage about the Israeli rampage against unarmed Palestinians. Its cleverness lies in omissions & evasions, half-truths & utter lies. And even with that, it’s still dumb-ass. Because the crimes of apartheid are so egregious.

Palestinians in Gaza wanted rightly to express political solidarity with those under military siege in East Jerusalem & the West Bank & about 200 gathered to protest near the apartheid barrier between Israel & Gaza. According to the Israeli army (the last source one would go to for verification but the only source media uses), they came too close to the fence & trespassed the no-go buffer zone imposed by Israel. They also allegedly threw rocks & rolled burning tires toward the army on the other side of the fence. Of course if the army weren’t deployed there, there’d have been no problem.

But it doesn’t matter whether the Palestinians in Gaza threw rocks or not. They could stand there twirling hula hoops or doing pirouettes in tutus & the Israeli military would consider a gathering defiance because what they are trying to crush is Intifada–the spirit of popular rebellion against colonialism & apartheid. Since they haven’t been able to crush it in Gaza after three carpet bombing sieges, Israel recognizes it has a problem–especially in the face of growing BDS.

In an act that surely violates umpteen international laws governing occupation & dealing with unarmed civilians, Israeli troops began firing across the fence at protesters. An army spokesperson said the soldiers “fired at the main instigators in order to halt their advance & disperse the riot.” And Reuters ate that up & published it as the gospel truth.

Six Palestinians were killed & at least 13 more were injured. Reuters tried to soften the blow of shooting down unarmed people by saying “the Islamist movement Hamas is calling for more unrest.” And damn well they should! There needs to be unrest all over this planet against Israeli soldiers shooting down unarmed protesters giving the victory sign.

The photo is the protest fired on by Israeli soldiers.

We stand with our brothers & sisters in Gaza. We are all Palestinians!

Build the boycott of Israel & pull out the forces of solidarity in emergency rallies demanding no aid of any kind to apartheid Israel.