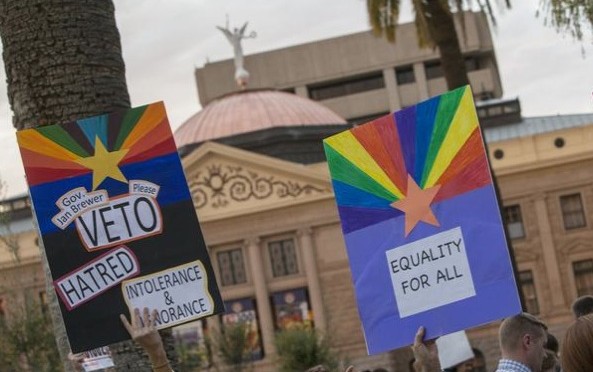 Arizona governor Jan Brewery has vetoed the antigay bill SB 1062 after a barrage of opposition. The US western states are filled with politicians like her who hold to a mythology they are descendants of the pioneers (Hollywood remains their guide to US history). Their real patrimony of course is cattle rustlers, outlaws on the run, decommissioned soldiers from the Confederate army or US government regiments to herd Native Americans onto reservations. An unsavory lot altogether. Their ancestors amassed enough stolen goods to bankroll their kids through school & buy them public office. They often wear Stetsons, like the Texas Rangers (they even sleep in the damn things)–a style, btw, stolen from Mexican inhabitants who they also forcibly dispossessed.

Most people think such types all ended up on ponderosas in Texas but the small state of Arizona has more than its fair share. Over the decades, their criminality has not diminished but is now accessorized with an invincible pomposity. Continuing their legacy of law-breaking, they are now attempting to destroy the US Bill of Rights–first through SB 1070, a vicious legal, military, & political assault on immigrants & immigrant rights; & now through SB 1062, a vicious, lowdown attempt to outlaw homosexuality under the guise of freedom of religion.Their entire patrimony is a godless one, guided more by the dictates of criminality than by the Beatitudes, so for them to call on religion to sanction attacks on democratic rights is not merely folly; it is farce.

Yesterday afternoon, governor Brewery announced she has vetoed SB 1062. The media explained it was due to pressure from conservative business owners & Republican legislators second-guessing their vote to outlaw LGBTI people. Governor Brewery is a contemptible politician (likely the progeny of a Confederate soldier) & incapable of doing the right thing for the right reason. In her own explanation for her veto, she tried to approximate a civil liberties defense but it sounds sarcastic coming from the mouth of a woman who sics the full force of the law (or is that lawlessness?) against undocumented immigrants. The only way she will do the right thing is with a cattle prod up her ass.

And the only reason conservative business owners & breast-beating politicians opposed SB 1062 is because they saw another boycott coming at them, like the one so effective in opposing anti-immigration legislation. The real force behind Brewery’s veto is those millions of Americans who stand up for the Bill of Rights, who won’t put their money where injustice prevails & who forego the grandeur of the Grand Canyon to stand in line at Disney World rather than give a dime to the systematic dismantling of democratic & human rights by two-bit Confederates.

Hats off to the Bill of Rights & to those who stand with it come hell or high water. There’s a victory to celebrate.