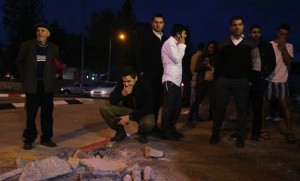 In the interests of full disclosure we post this photo of alleged Hamas rocket damage in Israel. This photo from March 2014 has made media rounds because it appears to be one of the few extant since Israel began Operation Ethnic Cleansing in December 2008. We say alleged because it damn well might be a pothole or it could be the exit from one of those Hamas “attack tunnels” that tried to burrow it’s way to a kibbutz but took a wrong turn & ended up in a major thoroughfare. What makes the photo so curious is that it is identified as Sderot, Israel, the town where they’re cowering in direct line of Hamas rockets in the hills overlooking Gaza while they cheer on ethnic cleansing. Does this story add up to you?

This photo is from the Christian Science Monitor (CSM) whose coverage of genocide in Gaza distinguishes itself very little from the rest of media. That is regrettable because in the 1970s when Palestinians didn’t stand a snow ball’s chance in hell of having their voices heard, the CSM had a charitable or noblesse oblige attitude toward Palestinians–a sort of documenting a vanishing people approach. It’s not certain when that changed or if patronizing is preferable to outright hostility. But the same pothole appears in coverage by The Times of Israel–a piece of hasbara trash if there ever was one. Scanty documentation gets a lot of mileage from being passed around.

Moving from the trash to the burlesque of hasbara, Thomas Friedman, the NY Times columnist who’s always hiding out in hotel rooms during uprisings & gets the latest news from the hotel manager, claims he’s on a kibbutz near Tel Aviv. He claims he toured a Hamas “attack tunnel” near the kibbutz & was struck by the craftsmanship, “the way all the prefab concrete pieces were perfectly designed & fit together.” This assessment from a man who probably doesn’t know a tenon from a mortise.

Never a man to be outdone by his own idiocy, Friedman goes on: “This tunnel took years & millions of dollars to build & required diverting massive resources from civilian roads, buildings & schools. It had one purpose, & it was not fruit exports. It was to shuttle fighters into the kibbutz.” Did our intrepid investigative reporter think to snap a few pictures? Or does he expect us to rely on his word–which is worth mud? And has been worth mud for a very long time now. Why the NY Times keeps this unfortunate fool on speaks volumes about their judgement & their support for Israeli ethnic cleansing.

Israel is already launching it’s propaganda offensive to counter the truth exposed by a million tweets. To the hundreds of photos of Palestinian children they are countering with Israeli politicians on a dissembling mission. Yair Lapid, a news reader turned Israeli finance minister & secular liberal (which only means he abandoned Judaism for Zionism), has an article in the Huntington Post titled “The Betrayal of the Intellectual”. Lapid’s writing would be an illustration of those “mediocre intellectuals” Herzl proposed to do the spade work of colonialism in Palestine.

In chastising US & European intellectuals for failing Israel during it’s genocidal attack on Gaza, Lapid-less-than-lucid says: “For them, the Palestinians are suffering more & so they must be right. Why? Because they have turned suffering into the only measure of justice.” Not content to leave bad enough alone, he continues down this unfortunate path: “When Hamas forces civilians to stand on the roof of a building which is used as a terrorist command center despite knowing that the building will be attacked (and they know because we warn them), who are we to hold responsible? When Hamas places rockets & explosives inside UN schools & fires from within hospitals, who are we to hold responsible? When Hamas fires thousands of rockets & mortars at the cities of Israel and fails to kill hundreds of our children only because of our technological edge & the Iron Dome missile defense system should we blame ourselves for suffering less?” One can only stand in awe of the sheer cynicism, treachery, & racism of that defense for ethnic cleansing–which is the official line of Israel.

It’s highly unlikely the hundreds of thousands of Palestinian supporters in the streets demanding “Stop the slaughter in Gaza!” all identify themselves as intellectuals. Israel wasn’t betrayed by intellectuals but by men & women of good will who can distinguish between truth in journalism & racist rubbish.

Answer this rubbish with a thunderous international chorus of “Stop the slaughter in Gaza!” & “End the blockade of Gaza!” And boycott all Israeli products (barcode beginning 729).