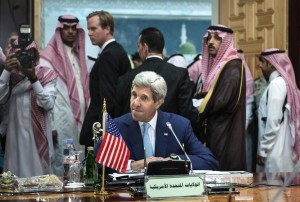 Despite overbearing & patrician manners, Kerry always looks clueless carrying out his schtick as secretary of state. Many, fooled by his dapper attire & head of hair, think highly of him but most of his achievements in life amount to little more than showboating.

He’s a typical US politician, born to immense privilege which allowed him to thrive way beyond his natural abilities. If he wasn’t the son of privilege he’d only be employable as assistant to a toilet cleaner. Think of him as our own Charlie Windsor.

Here Kerry is in Saudi Arabia looking for allies to beat back The Islamic State (IS, also known as ISIS or ISIL) in Iraq & Syria. And this is where the you-know-what of Islamophobia & US foreign policy hits the fans. Saudi Arabia is an absolute monarchy run according to Sharia Law. Most Saudis are Sunni Muslims & while only a minority identify with Wahhabism (an austere fundamentalist & puritanical form of Sunni Islam), that interpretation of Islam remains the basis of dynastic rule in the country.

The Islamic State (IS) are Sunni Muslims of the Salafi movement, described as synonymous or a hybrid of Wahhabism, who want to establish a fundamentalist Islamist state in Iraq, Syria & other parts of the Eastern Mediterranean region.

And this is where the treacheries of US foreign policy begin to manifest. US & British covert operatives are directly involved in coordinating & arming IS & other Islamist paramilitary groups in an elaborate strategy of divide & conquer to create & manipulate divisions among adversaries in order to maintain economic & political control in the region. So while the US & its nefarious allies escalate Islamophobic propaganda against ‘Islamist terrorists’, the US is allied with Islamist Saudi Arabia & sponsors Islamist paramilitary groups. Something’s gonna give. And not just because the narrative doesn’t add up but because the US is playing a very dangerous game.

Not left out of this strategy is the conflict between Israel & the Palestinians. IS members are twitter activists & refused to support Gaza against Israeli ethnic cleansing because Hamas was the wrong kind of Muslim. Fighting Hamas, they claim, is a priority to confronting Israeli apartheid & ethnic cleansing. This might be called a “dead giveaway” to who IS really is & what they stand for. Some commenters have tried to root this in Salafist theology just like some try to root Christian Zionism in the Old Testament. The roots are much more shallow & can be traced more reliably to propaganda coming out of think tanks & the Pentagon.

Who can keep up with all this chicanery!? Who can wrap their brains around the intriques & malignancy of US foreign policy? We only need know that US occupation & carpet bombing has never served humanitarian purpose but only colonialism & continue to stand steadfast against it.

No US-NATO war in Iraq & Syria! US out of Afghanistan!

PS: And not to be catty or anything, but Kerry really does have to hang off the Botox. He’s looking more & more like a Madame Tussauds exhibit.