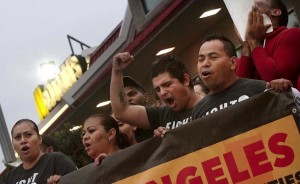 It’s been so long since the last major union battles in the US that most of us don’t remember them–even if we went through them. In 1981, then president Reagan fired over 11,000 striking air traffic controllers & banned them forever from federal service. His intervention to bust the union signalled a turning point in US labor history which wasn’t in the most dynamic state to begin with coming out of the Cold War.

In 1985, the state of Minnesota intervened with the National Guard to bust the Hormel meatpacker’s union in Austin, MN after a six month strike over cutting wages & dangerous working conditions. Those two strikes were a double whammy against labor militancy & both exposed the collusion of top union officials with union busting. So it’s no wonder that in the past nearly 30 years organized labor has acted more like a whipped puppy than the strongest section of the labor force. There’s a retrenchment within unions with officials talking tough, making deals, & standing steadfast against militant action in defense of safety, wages, benefits. Officials only get off their lard-asses to campaign for Democratic candidates like Elizabeth Warren. And if Hillary Clinton is the candidate for president, they will vigorously (as vigorously as a lard-ass can) campaign for her, claiming she is on the side of labor.

For those who’ve witnessed & been part of this process of decay, the emergence of fast food workers on the scene is a phenomenon of the greatest excitement & importance. It’s a gust of wind in the oxygen-free zone of the labor movement where there has been no serious labor organizing for decades. The percentage of US unionized workers is down to 11%, leaving most working people no way to fight for safety or wages or rights on the job. And employers have taken full advantage of this vulnerability. Working people have to eat crow in order to earn a living.

Fast food jobs were once considered “entry-level” jobs for people just out of high school as if that designation justified low wages, no benefits, & no rights whatsoever. It’s no longer just young people working these restaurants but seniors who can’t survive on social security alone & family people with kids to feed.

Union officials, still in cahoots with the union-busters, are already looking for ways to derail this new movement among fast food workers & get them into a “respectable” union that can sit on their militancy. Things are changing in this country & that con job may not be so easy to pull off anymore.

These McDonald’s workers in South Los Angeles are demanding $15 an hour & the right to form unions. Our fullest solidarity with their struggle.