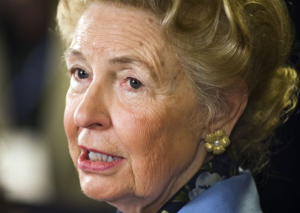 Suppose a feminist of my generation ought to say something when Phyllis Schlafly croaks. She was my mother’s generation & a co-thinker; both were constitutionally conservative. Nurtured in the McCarthy era of the 1950s, they were both ardently & irrationally hateful toward communism & saw communist conspirators & infiltrators behind every social evil, even fluoride in the municipal water supply.

The issue that prepossessed Schlafly was opposition to women’s rights, especially reproductive rights. The animosity, in my opinion, was not driven by theology so much as by a profound hatred for women, a competitive disrespect, an adherence to misogynist notions about women that prevailed in the 1950s–obedient, infantile, high-pitched, baby-talking domestics.

Schlafly is attributed with almost singlehandedly defeating the Equal Rights Amendment (ERA) which is a complete misreading of the history. The women’s movement during the ERA campaign had already been preempted by the Democratic Party & the strategy employed to campaign for the ERA was elitist & primarily electoral, i.e., electing candidates who claimed they supported it rather than mobilizing an independent movement to fight for the ERA. That failed strategy, not Schlafly was the downfall of the ERA.

Schlafly has often been called out for the hypocrisy of her life: campaigning for women to be nothing but wives & mothers but herself a lawyer, an activist in the Republican Party, a founder of rightwing groups, an activist on several rightwing, hateful causes who spent her entire life touring the country campaigning while a housekeeper attended to her six kids.

Media calls her a “towering social conservative character” but she was a crank, a rightwing ideologue who peddled stupidity, racism, misogyny, & every other social hatred until the day she died. She reflected the rancidity of the McCarthy era that lingered in the 1960s like a bad hangover & played a part in the backlash against the civil rights, women’s, LGBT, & antiwar movements.

She just endorsed Trump but she shared many political affinities with Clinton & would probably have endorsed her if she weren’t a woman.

May she fry in the nether regions a while before she RIPs.