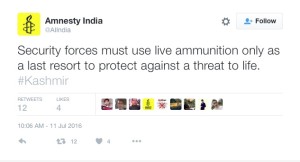 It cannot be said Amnesty International has taxed its resources to denounce human rights crimes in Kashmir. But its Indian chapter Amnesty India is actually endorsing the occupation & use of live ammunition against unarmed protesters.

If Amnesty International has any good sense left–& that is not apparent from its shameful reporting on Israeli human rights crimes in Gaza–they will toss Amnesty India out of the organization.

It’s not as if they’ll risk donations for such criminal compromises with the barbarisms of the Indian army since Modi is certainly making up for lost revenues in substantial hush monies. But the reputation of Amnesty will be shot to hell. And it’s hanging by a thread now.