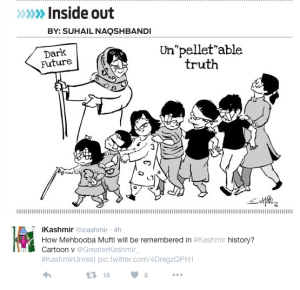 There will be an accounting of the numbers permanently injured & blinded by pellet munitions in Kashmir. It will likely show that the many children injured are not accidental or just caught between protesters & the Indian army but are an intentional policy of disabling youth exactly as Israel used in Gaza when it hunted down children with bombers in 2014.

Part of that policy is to inflict maximum psychological & physical damage on children to demoralize & terrify them against Intifada. India has likely been tutored in these policies by Israel which has long-term contracts for training military forces in Kashmir.