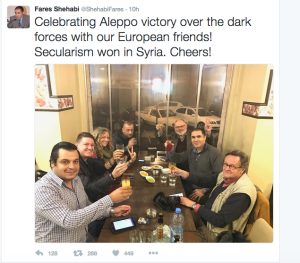 Reports & images of slaughter & retribution against civilians in east Aleppo by the Syrian Army as it takes over are apocalyptic. In response, Assad supporters on social media are exuberant & celebrating the killing field as a liberation.

Vanessa Beeley, an Assad propagandist, was scheduled to tour the US with Eva Bartlett, another propagandist for the regime, but is instead in Aleppo posing with Syrian soldiers giving the victory sign & dishonestly posting photos of happy children delighted to be freed.

Here she is dining with Fares Shehabi who recently hosted Bartlett in Aleppo. He is an industrialist & chair of the Syrian Federation of Industry, a member of the Syrian parliament representing Aleppo, & a candidate for Syrian Prime Minister.

Toasting & giving the victory sign (as Beeley is again doing here) whilst civilians in east Aleppo are dying gruesome deaths & bodies are piling up in the streets is that point when reactionary politics shades into sociopathology. It is a point of no return. It is a time of separation from old allies & ruptures that cannot be healed.

“All that is solid melts into air, all that is holy is profaned, & humanity is at last compelled to face with sober senses their real conditions of life & their relations with their kind.”