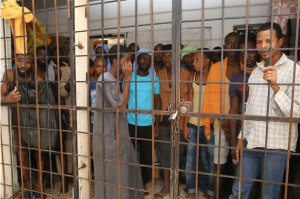 There has been a prolonged news blackout on the refugee crises in the Mediterranean & elsewhere. But for some reason, there has been some, albeit paltry, coverage of refugee flight on the Libya to Italy route. It may have to do with the renewed military deployment of US forces in Libya to fight ISIS forces. Such is the emancipatory character of the 2011 US-NATO devastation of Libya, complete with No Fly Zone. Libya is now a failed state with two regimes & with warring armed militias who are a serious threat to refugees.

A UN agency estimates at least a million refugees from several African countries are in Libya attempting to make the crossing to Lampedusa, an Italian island where there is a refugee processing camp (roughly 209km/130mi) from the nearest Libyan coast.
Frontex, the EU operation against refugees, has been running a military occupation of the Mediterranean for over a year, including navies from several European countries. There is no reason in the world why refugees continue to drown in dinghies. The UN no longer reports the numbers of those drowned on each route but reports that so far in 2016, at least 3,167 have drowned on all three major routes. You can be sure the majority of them drowned on the route from Libya to Lampedusa because the distance is considerably further & such is the character of EU racism.

Those refugees “rescued” from overturned dinghies are often returned to Libya & incarcerated in the living hell of refugee-cum-concentration camps which are overcrowded; filthy & stink of urine & poop because of lack of sanitation & showers; rampant with disease; swarming with bedbugs & other critters; with insufficient & inedible food; & where refugees are subjected to violence, including beatings & rape.

The head of one refugee-cum-concentration camp said the refugee inmates are becoming increasingly violent & constantly try to escape. Of course they are. Squalid, stinking, overcrowded detention is not suitable for human beings nor animals. What is the UN refugee agency doing about all this other than counting bodies? The UN is too involved with one of the competing regimes & US special forces to pay heed to the humanitarian crises. Sanctioning war & plunder is anyway its real mandate.

When the epitaphs for neoliberalism, the barbaric phase of capitalism, are finally written it will be an era commemorated with unbearable grief. But humanity will be dancing & pissing on its grave. At no time in human history have so many millions of people sustained such thoroughgoing plunder & high-tech militarism & been forced to flee with no place to go.

(Photo by Adem Demir/Anadolu Agency/Getty Images is one of the refugee prisons in Misrati, Libya.)