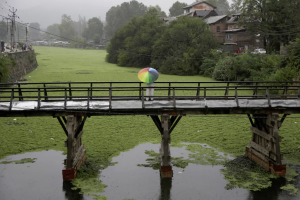 Photojournalism used to be a valuable source–not for getting the full story of events but for indicating where in the world journalists headed because of the importance of events. The use of the photos was not lost on editors who often used captions to misrepresent social struggles, particularly, but not only, the struggle of Palestinians.

It appears photojournalism is changing in a censorship kind of way, particularly in the Guardian-UK which now focuses on sports moments, festivals like the medieval jousting festival in Australia, flowers, sunsets, & their mainstay, Hindu religious rites in an anthropological way. Their recent coverage of Kashmir ignored the occupation & violence & focused on Muslim women’s prayer rituals.
This photo from yesterday takes the cake for insularity about Kashmir. It’s not that the editors are indifferent but that they are censoring, as FB does, all news about the violent military occupation of Kashmir.

The caption reads: “Kashmir–A man holding an umbrella fishes from a weed-covered part of the Dal Lake while standing on a wooden bridge in Srinagar.” The picture wouldn’t be interesting even if there were no occupation going on–at least any more than the photo of the woman walking in the rain in Gabon.

It is certain photojournalists are submitting photos of the many protests against the occupation & of the brutalities against protesters but instead of publishing them, the Guardian chooses to publish a man fishing off a bridge.