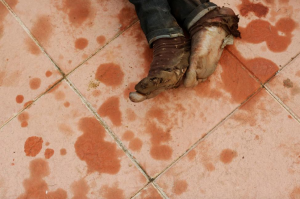 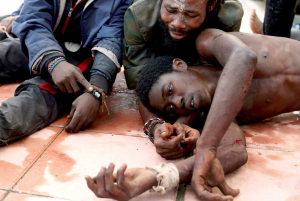 For the past year, there has been scant reporting on the refugee crises on all the Mediterranean routes–from North Africa to Spain & Italy & from Turkey to Greece.

When Spain introduced a new security law in late 2014, it not only gagged free speech & public protests in Spain, but it criminalized undocumented immigration from its two outposts on the North African coast–Ceuta & Melilla, which both border on Morocco & were a key transit point to Spain.

If refugees were able to cross the high razor-wire fences between the enclaves & Morocco, they stood a chance of claiming refugee status in Spain. The security law changed that & there has been no reporting on what Spain has been doing to prevent refugees from crossing.

Refugees from several countries in Africa encamped on the Morocco side waiting for opportune times to rush the fence & scale over. But in Morocco, their encampments were often attacked by Moroccan security forces & even as they scaled the fence they were assaulted from the rear as Spanish troops assaulted them as they crossed. The mostly young men were often injured severely by falling or being shredded by the razor-wire. Many drowned attempting to get around the barrier fence.

The refugees are being driven by inexorable forces like war & neoliberal economic plunder & of course continue to attempt the crossing.

These are the first photos in over a year from either of the two enclaves. They are from Ceuta. The young men are lying on the ground after crossing the fence. It’s likely they will be deported under the provisions of the 2014 security law but would not have attempted such an arduous climb if they didn’t think there was a chance to get to Europe.

Very little commentary is necessary about the photos.They show so dramatically the barbaric character of European Union immigration & refugee policy.

Immigration is a human right. Open the borders. Tear down the walls.