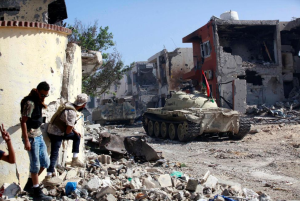 Emancipation US-style: these are Libyan fighters allied with the US in defending one of the two regimes in Libya–the one backed by the UN. No doubt for humanitarian reasons?

They are reportedly taking cover during a battle with ISIS militants in Sirte, Libya. Is that the battle gear the US supplies to its allies? Would they send special forces into battle with ISIS in baseball caps, sneakers, & no apparent arms?

Beware those who support a US-imposed No Fly Zone in Syria: that is how the monstrous US-NATO war in Libya began & has not ended. Those who hold up Libya as a model for how a NFZ works need their heads examined.

US out of Libya.