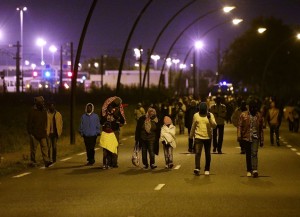 Media coverage of the refugee & immigrant crises is a curious thing. It’s focused now on refugees coming through Eastern Europe & reports almost nothing on those coming from northern African routes through Libya & Morocco or on the crisis at Calais, France.

There has been no coverage of Calais since late July except for a single photo in the Guardian-UK today of a young man giving another a haircut. The caption to that photo read “A man has a haircut at a site dubbed the “New Jungle,” where some 3,000 people have set up camp, many hoping to get to England.” Shouldn’t a respectable liberal newspaper find out who dubbed it the “New Jungle” & call out the arrant racism of that rather than repeat it? And shouldn’t a newspaper in England consider this story top priority when in just the past several months an estimated 37,000 refugees have attempted to cross the Channel Tunnel (50 km/31 mi long) to enter England?

While photos of refugees in Eastern Europe & of rescue operations of Africans in the Mediterranean show many women & small children, photos of African refugees at Calais & at Morocco focus primarily on young men. In fact we know, including from this photo & others at Calais, that women & children are among the refugees & are being subjected to the same police violence as the men. Is an editorial decision governing the coverage to give the racist impression England is being overrun by single Black men? Or is that just paranoia based on experience with the racist British government & the Guardian’s coverage of Palestinians?

African refugees at Calais continue to rush the tunnel in large groups, attempt to hitchhike on trucks & in cars, even attempt to walk the 31 miles. Immigration rights activists in London & Scotland have had huge welcome protests for refugees. There is no reporting of French immigration rights protests. Is this part of the news gray-out or is there in fact little mass opposition to French police violence against refugees?

(Photo of refugees at Calais by Yui Mok/PA)