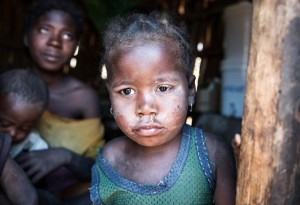 This is a common genre of photojournalism for Africa: a malnourished, clearly unhealthy little girl which NGOs will use to pity-monger & exploit to raise funds. Her name is Francine Sevasao & she lives in Madagascar, an island country off the coast of East Africa. We’re told Madagascar is one of the poorest countries in the world & that the southern part of the island is now sustaining a severe food shortage effecting at least 200,000 people, including 40,000 children under the age of five.

Upon investigation we learn that 80 percent earn their living in agriculture & that 90 percent of the 22 million Malagasy live under USD $2.00 a day. Quite frankly, if 90 percent are living under $2.00 a day, compared to the cost of living a whole lot more than 200,000 people are hungry in Madagascar. Nearly 20 million more.

The top agricultural products produced in the country include rice, beans, cereals & other starchy foods like maize, potato, cassava, numerous kinds of fruits & vegetables, coffee, tea, cacao, sugar, pepper, vanilla, cloves, honey. According to the government’s promotional literature, about 3.6 million tons of rice & one million tons of cereals & starchy foods are produced annually. They also have considerable livestock breeding of cattle, sheep, goats, swine, ducks, & chickens. The ocean surrounding Madagascar in rich in fish, shellfish, crustaceans. So why in the hell are so many people starving?

You can probably see the problem coming like a Mack truck. Since the 1980s, the IMF & World Bank have been imposing privatization schemes on the country in exchange for loans, expropriating agriculture & fishing for agribusiness plantations & skewing the economy for export markets.

As a result of IMF interference, there’s a thriving sweatshop industry in the country with child labor & tariff free zones; the tourist industry is going gang-busters with thousands of orphaned children exploited in prostitution; homelessness among city children is rampant.

They don’t explain all that in the media; one has to piece the story together from dozens of reports. But the general matrix of exploitation remains the same across the globe–that is, the pattern of neoliberalism, the barbaric phase of capitalism.

The IMF & World Bank issue country reports on the different economies where precious little can be learned about their methods of turning human beings into slaves. The reports are a collection of pieties & banalities like the January 2015 IMF report that said about Madagascar: “Younger people & large families are on average poorer than older people & small families.” IMF analysts aren’t that stupid but if they write reports about their barbaric practices, there might actually be a revolution somewhere.

This post is not a fund raising appeal but a call to arms. Even if Madagascar’s elite cannot be immediately forced to stop collusion with the IMF & World Bank, what’s to stop them from getting rice & beans from India or some other nearby country? Or what’s to stop them from halting exports of food products until its own people are fed? Nothing but greed.