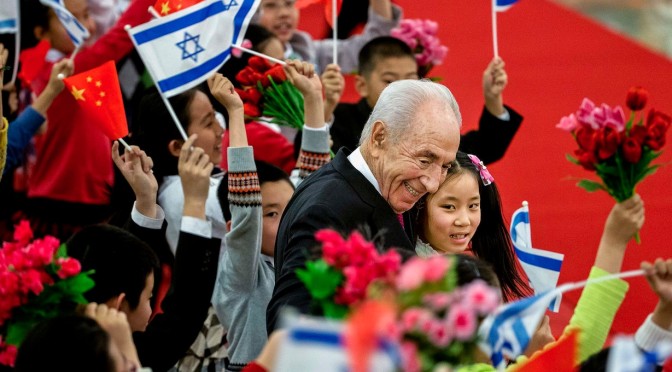 It may still be uncertain where China is headed politically since linking its fortunes to the barbarities of neoliberalism but this picture shows its headed fast in the wrong direction. Chinese president Xi Jinping invited Israeli president Shimon Peres for a three day state visit which began today. There are no reports on why Peres was invited or what they will be negotiating but it doesn’t fare well for Palestinians that in welcoming oratory, Xi encouraged Israel in the phony Israeli-Palestinian peace negotiations. The talks have long been dead as a doornail & all attempts to slap them into life only make them look more politically obscene. You cannot bomb people & wrest their farms & cities from them while talking peace. You are either completely stupid or corrupt as hell to claim otherwise. Though in Xi’s case, he’s likely sucking up to Israel to get a better deal on military technology like the $1 billion surveillance equipment they once bought.

In cringe-worthy rhetoric, Xi said the Chinese & Jewish people have always gotten along, especially during WWII when they commonly opposed fascism & militarism. Of course the falling out came after WWII with the establishment of Israel on Palestinian lands in 1948. Until Mao’s death in 1976, China’s foreign policy was based, at least rhetorically, on opposing colonialism & championing the oppressed. Diplomatic relations with Israel were not established until 1992 but Israel had a long, secretive military relationship with China since at least 1979, but probably earlier. It now has what is called a “pragmatic, flexible diplomatic strategy” in the Middle East–a term that covers a multitude of betrayals of the oppressed, & not just the Palestinians.

The Jerusalem Post, a conservative Israeli newspaper, reported a few years ago that the Chinese were “allured by Israeli military prowess & by “Jewish genius” exhibited in men such as Karl Marx & Albert Einstein.” We don’t know about Einstein but we’re certain Marx would roll over in his grave at such a statement. He may have been an imperfect man, but he had no truck with such elitist ethnic chauvinism & would never have betrayed the oppressed. If there is such a thing as “Jewish genius” you sure wouldn’t know it from the Zionist propaganda machine which has been stuck on one note shrieking “antisemite” since its inception.

Any extant Maoists should try to explain this disgraceful scene where innocent Chinese children are hauled out to wave flags for a country shamed before the world for its violence toward Palestinians.

(Photo of Peres at the welcoming ceremony by Alexander F. Yuan/AP)