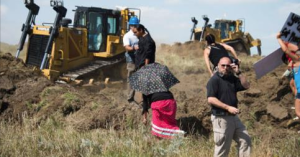 The AFL-CIO, one of the two labor federations in the fractured US trade union movement, just announced its support for the Dakota Access oil pipeline project being opposed massively & vigorously by the Standing Rock Sioux Tribe in North Dakota & by environmentalists.

The Standing Rock nation opposes the project because it violates their sovereignty, expropriates their lands, imperils their water supply, & tramples & destroys sacred grounds. These are the same neoliberal capitalist policies being carried out & actively opposed by indigenous peoples on every continent. Their struggles have put them on the front lines against the environmental destruction leading to climate change.

The AFL-CIO says it endorses the project because it makes the US more competitive & provides high-paying jobs to workers in the construction trades. Union officials are responding to pressure from racist, xenophobic unions who prioritize their privileges & union scale wages (even on dangerous jobs) over the rights of Native Americans.

The AFL-CIO is in a conundrum of its own creation, of decades of racist policies against undocumented immigrant workers, Black, Latino, & women workers. In place of solidarity, it rendered social divisions & support for US wars.

Don’t ask the women & Black workers–who through affirmative action in the 1970s finally got access to high-paying, formerly all-white male construction & factory jobs–to feel sorry for these mostly white guys who will have to look for other work. When it came to layoffs in the 1980s & 1990s, we were the first to go & many had to settle again for minimum wage jobs.

If high-paid union workers want to solve their employment problems, it shouldn’t be on the backs of women & Black workers or of Native American sovereignty. They need to occupy the AFL-CIO union offices & regain control of the union movement in the interests of all workers, not just their own white male asses.

Solidarity is the iron law of social transformation & union workers who want all the good jobs & privileges are not exempt from its implacable demands. They will either grasp that concept or they will have to learn the hard way that “an injury to one is an injury to all.”