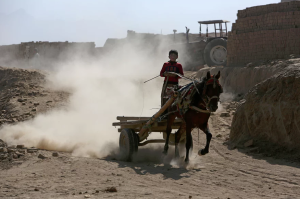 As the 15th anniversary of the US-NATO war approaches in October, we are facing a long virtual news blackout. The only coverage is of suicide bombings in Kabul without media offering any real explanations of what those are all about. You don’t have to be a libertarian conspiracy theorist to suspect agents provocateurs to justify continuing US occupation & bombing.

Meanwhile, there is a campaign by the Pakistani government & rightwing politicians to expel the nearly 3 million Afghan refugees from the war. The UN refugee agency has been complicit in that campaign trying to induce Afghans with chump change to move back to a war zone with no housing, jobs, security.

Photojournalism, like that covering Kashmir, has disgraced itself with photos of Afghan sunsets, children hop-scotching, balloon venders.This rare photo from Kabul depicts a young boy working a horse team at a brick factory. The health hazards of brick manufacturing make it completely unsuitable & extremely dangerous for this child who will most likely die at a young age from respiratory disorders & exposure to toxic fumes & dust. This is the quality of life for children under US occupation.

Those who defend this war as a way to emancipate women should hang their heads in shame because to most women, the lives of their children are more important than what the hell they wear.

US out of Afghanistan. US out of Pakistan.