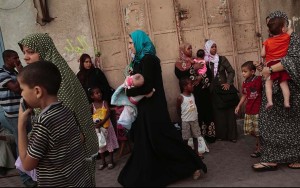 Israel has not ceased bombing or strafing Palestinians with illegal munitions like flechette shells & DIME weapons (which charcoal skin & sever limbs). But when this frantic binge of ethnic cleansing is halted by massive international opposition & revulsion at the savagery, Israel will stand more shamed & isolated than it has in its 66 years of ignominious existence. This is a historic moment signalling a historic reversal in the fate of Israel & Palestinians. Israel, reflecting political desperation & the dry rot of Zionism, went too far. And they did it after Palestinians organized an international economic & cultural boycott of Israel which exposed the truth of Israel & the justice of Palestinians behind the rancid Exodus myth created in film, song, & hasbara.

World politicians came late to the revolution but their actions are a sign worth noting: Sweden refused landing to the plane of Shimon Peres, the former paramilitary death squad leader now president of Israel; Chile has stopped trade with Israel; Ecuador recalled its ambassador to Israel; South Africa is attempting to expel the Israeli ambassador; the Brazilian ambassador to the UN & the “king” of Sweden & his wife appeared in public wearing the keffiyeh, the Palestinian scarf. To be frank, these gestures may be telling but they are wimpy & not the scale of solidarity these regimes are capable of mobilizing. What about public denunciations & explanations? What about embargoes on Israel? What about cutting off aid & military deals with Israel? What about telling the damn truth after decades of going along with the lies?

It is the tens of thousands of people around the world who almost spontaneously erupted in a massive expression of solidarity with Gaza who are creating this historic shift. Again it must be said, social transformation & Palestinian justice are a collective commitment, not a grandstanding operation. It isn’t some ambassador draping the keffiyeh around his neck that turned the tide, but the tens of thousands of men & women of good will who responded to the call of justice & in a thunderous international chorus demand “Stop the massacre of Gaza!”

We have not witnessed a phenomenon like this outpouring of international solidarity since opposition to the war in Vietnam. The media always gave itself too much credit for turning public opinion against the Vietnam War & misrepresented & failed to accurately report antiwar activity for the duration of the war & certainly never gave the Vietnamese their due. But the hundreds of photos flooding out of Gaza of unspeakable barbarisms do play a central role in undoing the Exodus narrative & affirming the historic claims of Palestinians. It is clear this is ethnic cleansing & not self-defense. No one can ever undo the damage of claiming Israelis are huddled terrified in bomb shelters when photojournalism shows them whooping it up over genocide on the hills of Sderot.

These women & children in Gaza City are fleeing from what they thought were safe buildings now being bombed by Israel. How do you undo this image? Even when media tries to temper the impact in their captions, they come out looking like jackasses covering for genocide.

And one last thing: to those who stand on the side in this struggle–shaking the naughty finger at both sides or chiding Palestinians for alleged terrorism–shame on you. Because in ethnic cleansing, there is only one side, the side of justice. And if you aren’t on it actively, you are in silent collusion. And that’s not too harsh a condemnation to make.