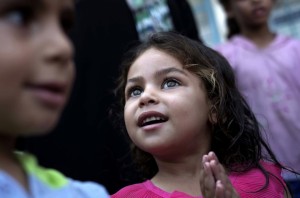 We should also take a moment to honor the children of Gaza who survived the savagery of Operation Ethnic Cleansing, but who witnessed unspeakable horrors & endured unbearable fear & loss.

There are studies describing how traumatized the children of Gaza are by Israeli ethnic cleansing which never stops. How could they not be? Thousands of US soldiers returning from war zones commit suicide, or bury themselves in addiction, or get forever lost in psychosis to erase the trauma of war & their part in it. We know from combat veterans of US wars that when they return to civilian life & regain psychic balance, they are unable to forgive themselves for what they did or forget what they saw.

Imagine then what it does to small, innocent children to be hunted down like animals by bombers & tanks? Once again, the sole purpose of Israel targeting children is to demoralize & destroy Palestinian resistance to Israeli apartheid & ethnic cleansing.

Palestinian parents in Gaza won’t be given time to heal or help their children, many of whom are now homeless. This makes the commitment of Palestinian solidarity all the more compelling & all the more urgent.

Stand with the children of Gaza: Demand “Stop the slaughter in Gaza”, “End the blockade of Gaza!” & evangelize for the economic boycott of Israel (barcode beginning 729).

Photo is 3-year-old Rahaf Al Attar at a UN refugee center in Gaza City in a play session organized by a local NGO to lessen the stress on chilldren.