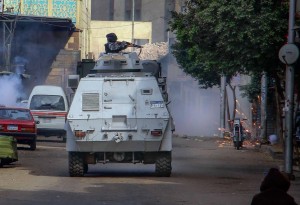 In November 2013, the Egyptian military regime banned all protests & mandated the use of police force to disperse them. The repression & crackdown on civil liberties has been massive & what is remarkable is that so many continue to defy it. Thousands of activists from secular groups & the Muslim Brotherhood (MB) have been imprisoned for violating the law & have received draconian sentences, including mass death sentences.

Today is the fourth anniversary of the 2011 uprising that toppled Hosni Mubarak; the regime of General Abdel-Fattah el-Sissi was on full deployment. They sealed off Tahrir Square & other city squares, beefed up police at state buildings, used riot cops with tear gas & birdshot to disperse protesters from downtown Cairo & in other cities, & moved tanks into the Cairo suburb of Matariyah firing tear gas & birdshot. The Health Ministry reports 15 dead & 37 injured (nationwide) which are likely lowball figures. 134 people have been arrested–which is also likely a lowball figure.

Matariyah is known as an Islamist & MB stronghold. It is a working class district that played a role in the 2011 uprising with large protests, 20 police cars torched, & two police stations looted & torched. It has become a flashpoint for confrontations between Islamists & the regime since the ouster of Morsi in July 2013. At least nine of the fifteen protesters killed by police today were in Matariyah. They left the area covered in debris & in a cloud of tear gas.

Media in Egypt have maligned the achievements of the 2011 uprising. Hoping to convince who? Media elsewhere attempt to portray the opposition as primarily MB. It’s reported the MB & secular groups are unable to overcome mutual distrust & join forces against the regime & that distrust in entirely understandable from MB support for the conduct of the Morsi regime. But if the el-Sissi regime & military are to be successfully defied, a rapprochement in action must be forged. A defense of MB activists under attack is essential to that unity.

Cynics can point to the Egyptian uprising as proof that ‘resistance is futile’ but cynicism at best is a passive acceptance of the status quo. Egyptian activists & millions around the world learned some important political lessons that will not go to waste: never to trust the military; the importance of self-defense, especially for women; rejecting divide & conquer between religious & political groups; the importance of elaborating a program for action & forging a democratic leadership to carry it out.

Recovering psychologically & politically from the defeat of the 2011 uprising by the military takes time but as we know from the thousands who continue to defy the regime & the continuing economic & political crisis of Egypt, it’s only a matter of time before there is a mass resurgence. The crisis of the democracy movement is profound & important but the crisis of the Egyptian regime is more important. If the regime were confident it had crushed the 2011 uprising it would have no need for repression.

Our fullest solidarity with those who continue to defy tyranny.

(Photo of occupation in Matariyah district by Ahmed Abdel Fattah)