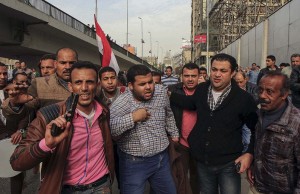 The man holding his chest is a democracy protester in downtown Cairo being arrested & dragged in today by a goon squad of plainclothes police. Riot cops dispersed other protesters using tear gas & birdshot. Once this young man enters the gulag of Egyptian prisons his fate is uncertain. Across Egypt a reported 134 were arrested but the figure is certainly much higher.

Birdshot, which is used widely against protesters in Bahrain, is extremely lethal & disfiguring. Last night on the eve of the 2011 uprising, Shaima al-Sabbagh, an activist in the Socialist Popular Alliance party (& the mother of a 5-year-old boy), was hit in the head with birdshot by riot cops firing to disperse protesters as they marched toward Tahrir Square to lay a commemorative wreath.

The prime minister said al-Sabbagh’s death was being investigated but it is now reported in a FB post by a prominent law center that fellow protesters who gave investigators their account of the incident have been charged with assaulting police & taking part in an illegal protest. Drawing on divide & conquer, the interior minister suggested Islamist “infiltrators” were to blame.

We stand in awe of the courage of these protesters & salute them. We regret the state of international solidarity is still too weak to stay the hand of the el-Sissi regime.