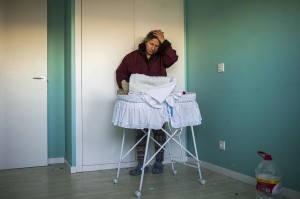 Cecilia Paredes tends to her 2-month-old infant while riot cops surround her apartment in Madrid, Spain. Is the SWAT team there because Paredes smuggles drugs or robbed a bank or murdered someone–or protested against the austerity programs? What felony has she committed that merits a SWAT team? What evil lurks behind that feigned distress?

Paredes lost her job as an elderly care assistant (the wages for such work are always rock bottom) two years ago & her husband Wilson Ruilova is an unemployed electrician. They have three children: the baby plus a 7-year-old & a teenager. The family are immigrants from Ecuador.

Without jobs they have been unable to pay the rent & the SWAT team is there to evict them. (No surprise since SWAT teams are now used even to deliver traffic citations to church ladies.) Spain does have unemployment insurance but all sorts of restrictions & cutbacks in benefits are part of the austerity programs. When they moved into the building it was government owned but under the terms of the IMF-EU austerity programs requiring privatization, it was sold last year to an investor group along with 1,800 other apartments built as public housing for the working poor. The new owner (indistinguishable from a beast of prey) demanded the family’s eviction.

The resistance of Paredes & Ruilova to eviction can be understood since it’s hell to live on the street in the winter with an infant & two kids. What’s also understandable is why the Spanish government is trying to make all protest illegal.

Our fullest solidarity with those millions of Spanish who continue to protest this barbarism. Our deepest regrets we have not yet marshaled enough solidarity to stay the hand of neoliberal predation for which this young family is paying so dearly.