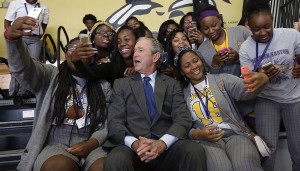 This photo of Bush in New Orleans on the 10th anniversary of Hurricane Katrina falls under the rubric of re-writing history. It’s how scoundrels, psychos, & mass murderers get resurrected as heroes.

For one week, people around the world witnessed on live television that the Bush regime did absolutely nothing while hundreds of Black residents of New Orleans were on rooftops waiting for rescue & thousands were crammed into a sports stadium without food & water crying for help. A regime that has taken out whole countries with sophisticated, state-of-the art military equipment would not deliver emergency aid to people because they were Black–& then vilified them as looters.

We don’t know who these young women are that they would participate in this dog & pony spectacle. Hopefully they will study Katrina & understand how compromising & dishonest this image is–especially because retrospectives on Katrina point out that New Orleans is back as a tourist haven but that the 9th Ward where the poorest Black residents lived remains a shambles & un-rebuilt.

All power to the emerging civil rights & Black power movement. May they kick ass & set the historic record straight as the first civil rights movement in the 1960s began.