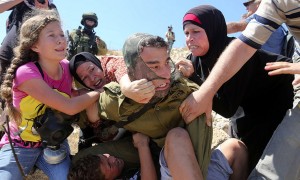 The photo (on the top) is of young women defending a small boy being assaulted by an Israeli soldier in the West Bank. A video & several photos of the incident have circulated because it displays almost iconic toughness against the barbaric occupation. All of these women stand a chance of being arrested with the boy & put indefinitely in the Israeli gulag subject to torture & abuse.

But unless the eyes deceive, this isn’t the first time the young girl in the pink & yellow tee-shirt has gone up against IDF soldiers. The photo (on the bottom) was taken in February 2015 also in the West Bank. The girl in the black tee saying “Palestine” is her spitting image.

We stand in awe of the spirit of Intifada; we are also outraged that young people grow up having to fight military occupation & dispossession.